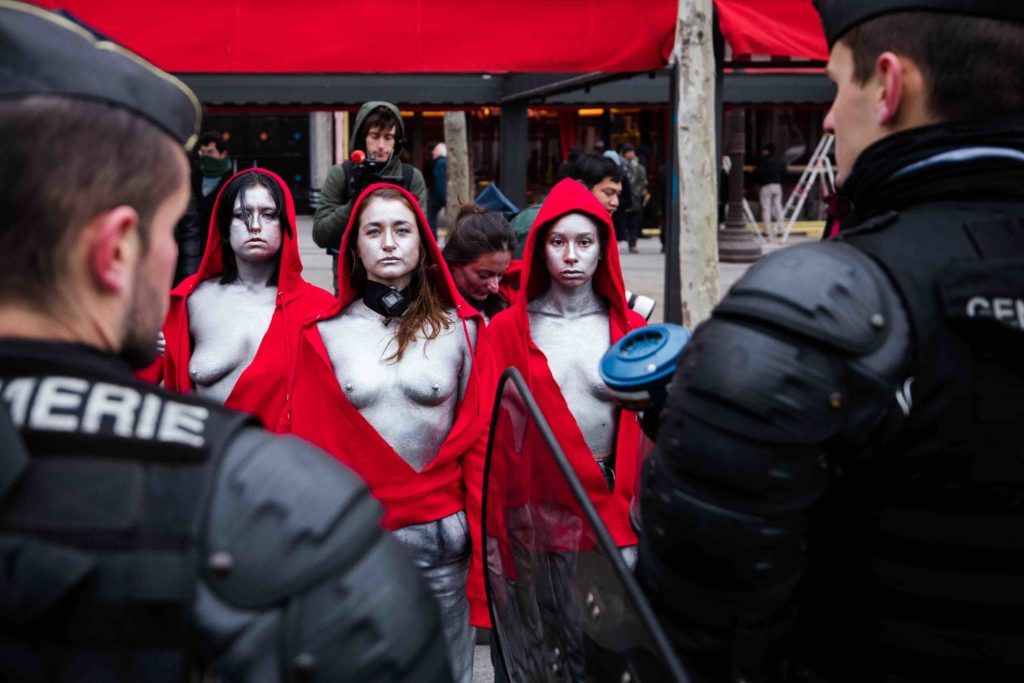 Deborah de Robertis
Collective.aporia’s first festival, titled Bodies of Manifestation, will be held in August 2020 in Trieste, Italy. We are collaborating with the Italian theater collective, Teatro degli Sterpi, to put on the event at their venue.

Theme
The body in manifestation is no longer singular, but a moving organism, a communal body. With this in mind, collective.aporia will work with Teatro degli Sterpi and international guests to explore the following questions:

- How does the artist utilize their own body to aid the collective body within or through a manifestation?
- How can we expand the boundaries of the body, or of the manifestation, through art to include our international family?
- How are some bodies in protest/manifestation simply by existing? How can our international collective support them?
​
As we tackle this event and research, we are aware that the body of protest, and the bodies in protest, are simultaneously vulnerable and powerful. They are both seen and translated—as the self and as the movement it represents.

This theme is inspired in part by French artist Deborah de Robertis (pictured above), who organized a performance piece at a yellow vest manifestation (the French word for demonstration or protest) where she and four other women stood topless in a costume reminiscent of the French Goddess of Liberty Mariannein in front of riot police. Robertis and her peers were labeled by the onlooking country as everything from heroes to whores, shaking the very core of the oppressor’s side with their performance.

Hangar Teatri | Trieste, Italy
This kind of societal translation of art often shows deeply-rooted issues and illnesses of the institutions that govern it, which, while unfortunate, can lend itself as a tool to the movement. By mistranslating bodies in protest art, oppressive powers are effectively showing their hand. This allows for an unshrouded look at their weaknesses, and can further strengthen the strategies of the international collective, sparking further research and art-making.

At this festival, collective.aporia will gather some of the world’s most diverse and potent activist artists working with the body in different mediums, and ask them to explore methods, philosophies, and cross-cultural similarities/differences of art-making within and from the manifestation with the larger community. The artists will facilitate a public art project that invites the community to participate in a manifestation. This manifestation will not follow one doctrine or political belief, but rather allow a larger population to think of their own bodies in protest, and how they are connected to others. This art project will be documented and broadcast internationally in order to expand the impact, as well as invite the online community to collaborate with the project through a submissions call.
Dates, prices, and registration will be available February 2020.
Powered by