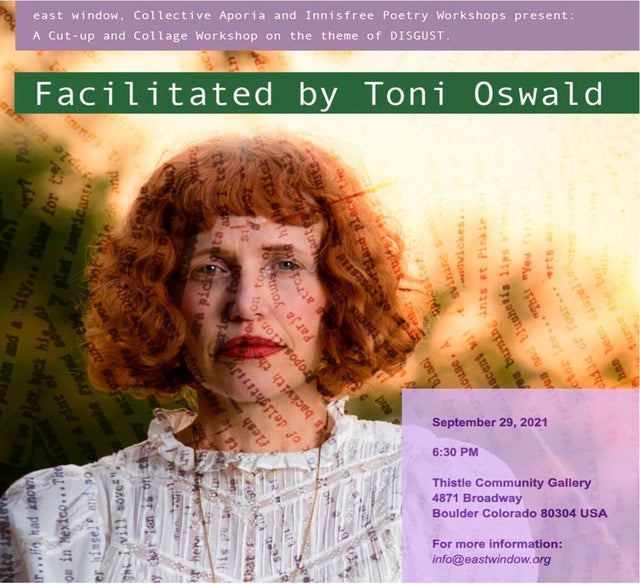 REGISTRATION IS VIA EAST WINDOW AT THIS LINK: https://eastwindow.org/disgust-workshop

This workshop is part of the Innisfree Workshop Series. Our full calendar of events can be found at https://www.collectiveaporia.com/innisfree.html#/

In this workshop, we will explore the experimental form and technique of writing known as the Cut-up method, whereby text and image fragments are cut up and intuitively pieced together to form open associative narrative structures in order to expand the boundaries of language, and describe human consciousness. Invented by the writer William Burroughs as a way of exposing word and image controls, and thus freeing oneself from them, an alteration of consciousness occurs in both the writer and the reader of the Cut-up text.

Cut-up texts are comparable to similar contemporary experiments in other arts, such as action painting, happenings, and aleatory music. Burroughs’ theory of the cutup also parallels avant-garde literary theory, such as structuralism and deconstruction.

During the workshop we will go over the history and use of the written cut-up (as well as its twin—the visual collage), and explore the many different methods one can exercise to cut-up text and image.

“The cut-up method brings to writers the collage, which has been used by painters for seventy years. The best writings seem to be done almost by accident, but writers until the cut-up method was made explicit, had no way to produce the accident of spontaneity. You cannot will spontaneity. But you can introduce the unpredictable spontaneous factor with a pair of scissors.” William Burroughs

“If you put three or four dissociated ideas together and create awkward relationships with them, the unconscious intelligence that comes from those pairings is really quite startling sometimes, quite provocative.” David Bowie

**Students will need to bring the following to workshop:

-A narrative book (fiction or nonfiction, it doesn’t really matter) that you are willing to take apart, cut up, and mark with black marker. Thrift shops or local neighborhood book libraries (seen around town) are a great place to find one. We will also have a few for workshop participants.

- 1-3 magazines you can use for collage.

Toni Oswald is a writer & musician who has performed and shown her work across the United States and Europe. She has released four albums under the altar ego The Diary of Ic Explura & publications include The Oyez Review, Bombay Gin, Heroes Are Gang Leader’s Gianthology, & The Tattered Press, among others. She is currently working on a novel about a girl clown set in the 1950s entitled The Gorgeous Funeral, as well as a collection of short stories set in Los Angeles called Dying on the Vine. Her first book, Sirens, was released by Gesture Press in 2020. She likes gold teeth, cats, and trees. She currently lives with her husband Max and their cats Kiki Pamplemousse Fontaine and Charlie Chaplin in Boulder, Colorado.

We look forward to seeing you at the workshop!

Call for submissions and project information can be found at https://eastwindow.org/disgust

Add to Cart
Powered by

Create your own unique website with customizable templates.
UA-202623137-1